We know that  incivility has increased in social media (such as Twitter) during the last decades. But this is about the general public’s tweets. Is this also true about  ELECTED OFFICIALS? After all, elected officials are expected to rise above the mob and be the role model for society.

Twitter is one of the most popular ways of communication between politicians and citizens. The communicative behavior of elected officials significantly affects the behavior of civilians, especially in debates and discussions. To see if elected politicians have done any better than their common representatives, Jeremy Frimer and his colleagues, in this study, asked whether publishing uncivil tweets has increased among American politicians over time, and if so, what could be the reasons for that.

A total of 1.3 million main tweets from congress members and the United States presidents (Barack Obama and Donald Trump) as well as about 1 million tweets of American citizens published over one decade were randomly selected (2004 – 2019).They used machine learning technologies to estimate the probability of classifying a Tweet incivility rate by a human observer. The tweets were classified from 0 (civil) to 100 (uncivil), indicating their incivility (see Table 1 for examples). The results showed that, over the last decade, American politicians and the population published 23% and 28% more uncivil tweets, respectively.

Table 1. How the Ai classifier characterized the level of incivility

As we can see in Figure 1-A, the levels of the incivility in presidential tweets did not change in President Obama’s Twitter feed (averaging 13.4). However, it surged by 76% when President Trump took office (23.0). Interestingly, democrats published more of this type of Tweet than republicans, and this trend grew dramatically among Democrats over time (Figure 1-B). There was no significant relationship between this increasing trend and factors such as linguistic covariates, political polarization in Congress, increasing partisanship, and the gender, age, and race of the congress members. 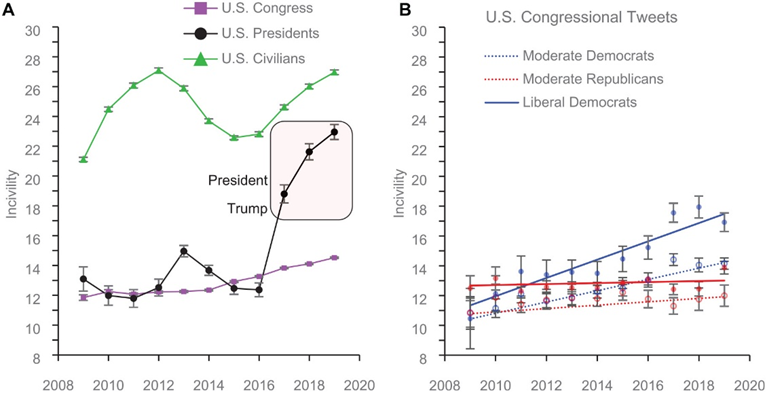 Figure 1. Changes in levels of incivility among American politicians on Twitter during the last decade. 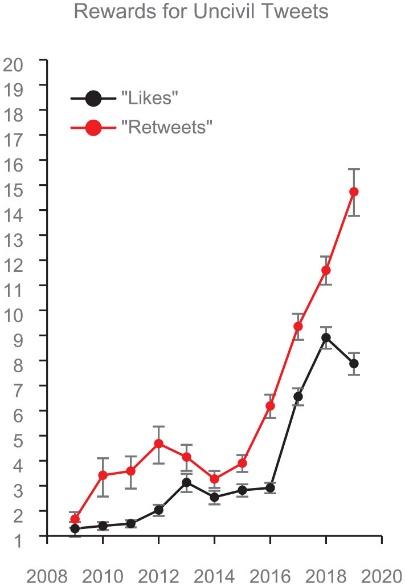 Figure 2. Rewards for uncivil tweeting grow stronger over time . The Y-axis shows the relative frequency of likes and retweets in comparison to the year 2008.

This trend could be due to the reinforcement learning in users and Twitter’s platform-specific characteristics: showing the number of likes and retweets  works as a reward and promotes a form of learning. Politicians who notice that their uncivil tweets receive more attention than their civil tweets will, over time, learn to publish many more uncivil tweets to achieve more popularity.

For more analysis, a metric was defined as “social approval,” which measured the ratio of “likes” per “retweets.” For uncivil tweets, this measure was lower than for civil tweets, meaning that the Twitter population did not confirm these types of messages. Therefore they showed that the number of “likes” did not necessarily indicate that the Twitter users approved of a tweet. Uncivil tweets may receive more attention than civil ones because they have a fun aspect for people, and people often cannot ignore this antisocial behavior and feel a responsibility to share them and inform others. As a result, uncivil tweets have received many more “likes” because they have been published more and received many users’ attention.